a group project, that raises questions about the romantic notions we have about the countryside 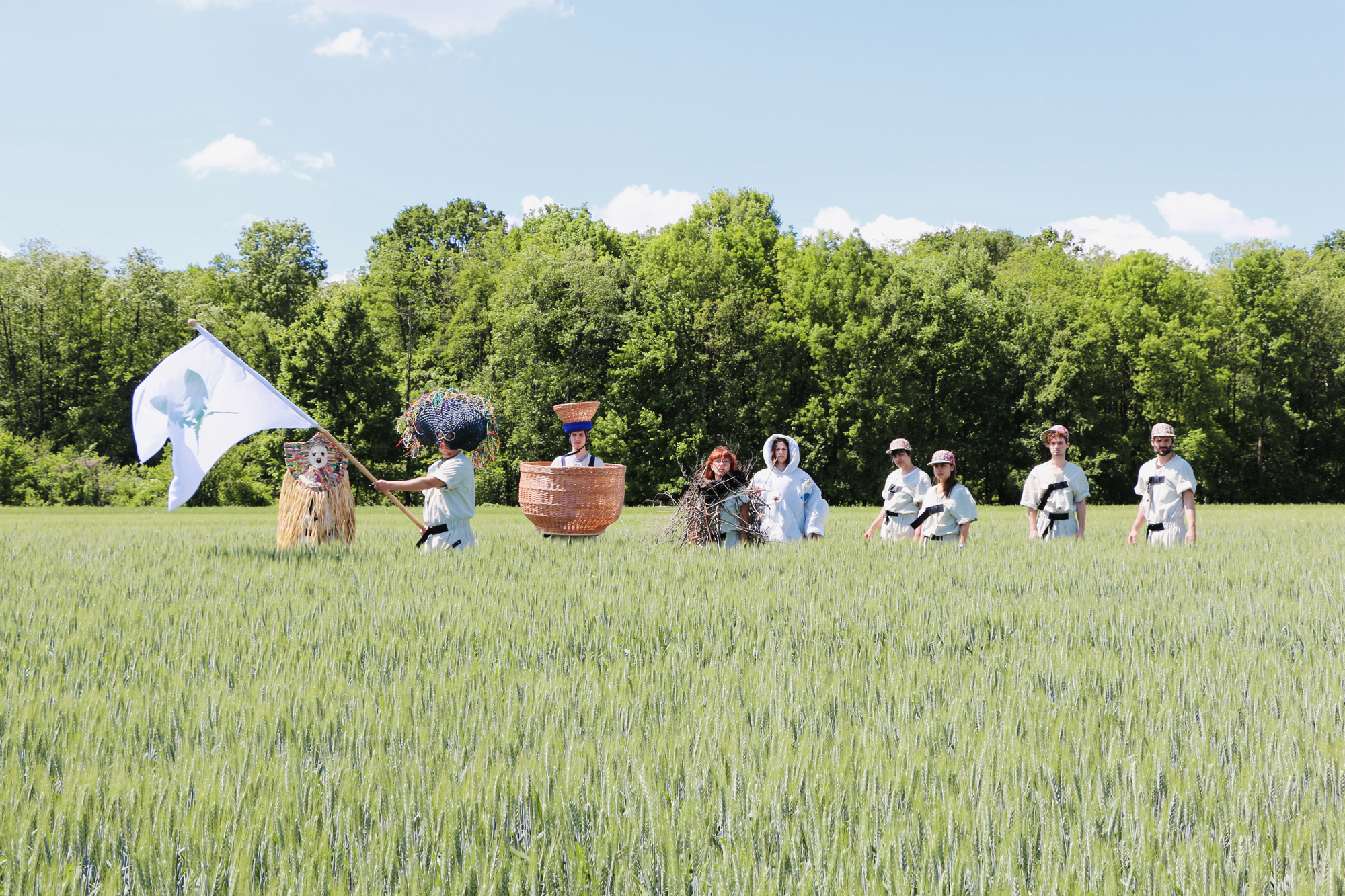 The Ljubljana Design Biennial 2017 entitled BIO25 – Farawaysoclose, curated by Angela Rui and Maja Vardjan at the MAO Museum in Ljubljana, invited us to join that edition of the Biennale as so called ‘translators’ to lead a group-project. The international and interdisciplinary team consisted of: Sara Evelyn Brown, Lucia Massari, Nina Mršnik, Johanna Schmeer, Giulia Soldati, Jakob Travnik and us supported by our team Elisa Polner and Bernd van Riel. Countryside Reloaded was our topic to research and to generate a group-project. The group received additional feedback and input by the food researcher Klemen Košir.
From September 2016 until May 2017, the team met many times to discuss and brainstorm together about the countryside and its functions, dysfunctions and possibilities formulating common and individual Design concepts that worked well together as a whole to tell the story of humans as temporary visitors in the constructed countryside: The surroundings of the Genterovci village in the Lendava region of Slovenia has been temporarily transformed into a land of knowledge, a space of awareness and criticism, where food production, consumption, and information are experienced along a 4km-surrealist tour that offers not only walking, but also foraging and eating. Physical interventions along the path function as a live experience of augmented reality exposing the artificial dimension of nature: highlighted navigation elements emphasize the rigid geometry of the land, food fields with 3D infographics feature data related to food production and consumption, and harvesting devices showcase the autonomy of the machines that have replaced human labour. The empty supermarket, as the starting and ending point of the paths, has replaced the model of acquiring food from local exchanges, and is now transformed into a fleeting place for social exchange conveyed through the experience of food. With these varied approaches, each component of the episode, sensitively revisited and staged in the exhibition, challenges the viewers’ perception of the countryside’ (Bio 25 catalogue excerpt)
The path and local projects were installed on site and on view from May until November 2017.

a curated trail entitled highlighted realities - Constructed narration of the countryside, in Genterovci near Lendava is marked by a system of pink-coloured wooden elements. All the elements together with their specific arrangement within a particular area highlight certain constructed aspects of the countryside such as straight lines, right angles and man-made bodies of water. Within each cluster, the juxtaposition between the variously-positioned elements and the constructed ‘natural’ surroundings suggests a particular type of function, such as a viewing direction, the way to a resting spot, or a direction to take.
image credit: Delfino Sisto Legnani & Marco Cappelletti - MAO 25 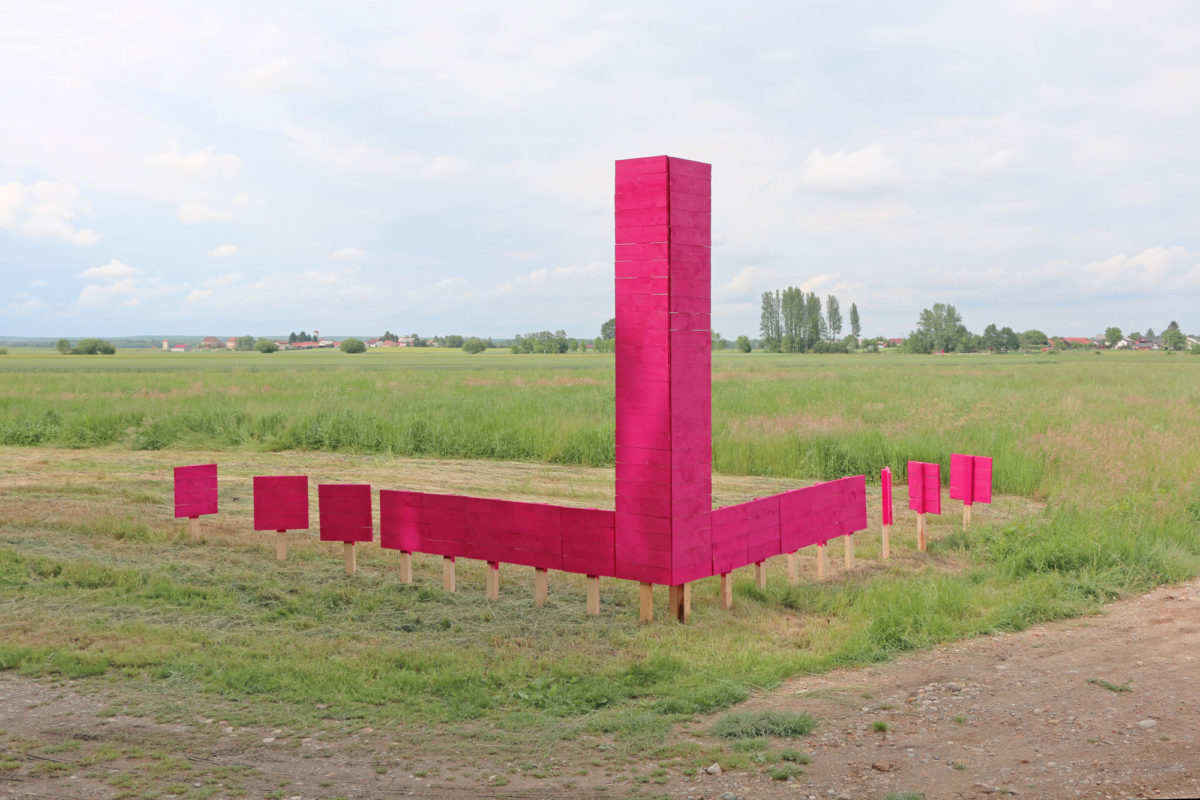 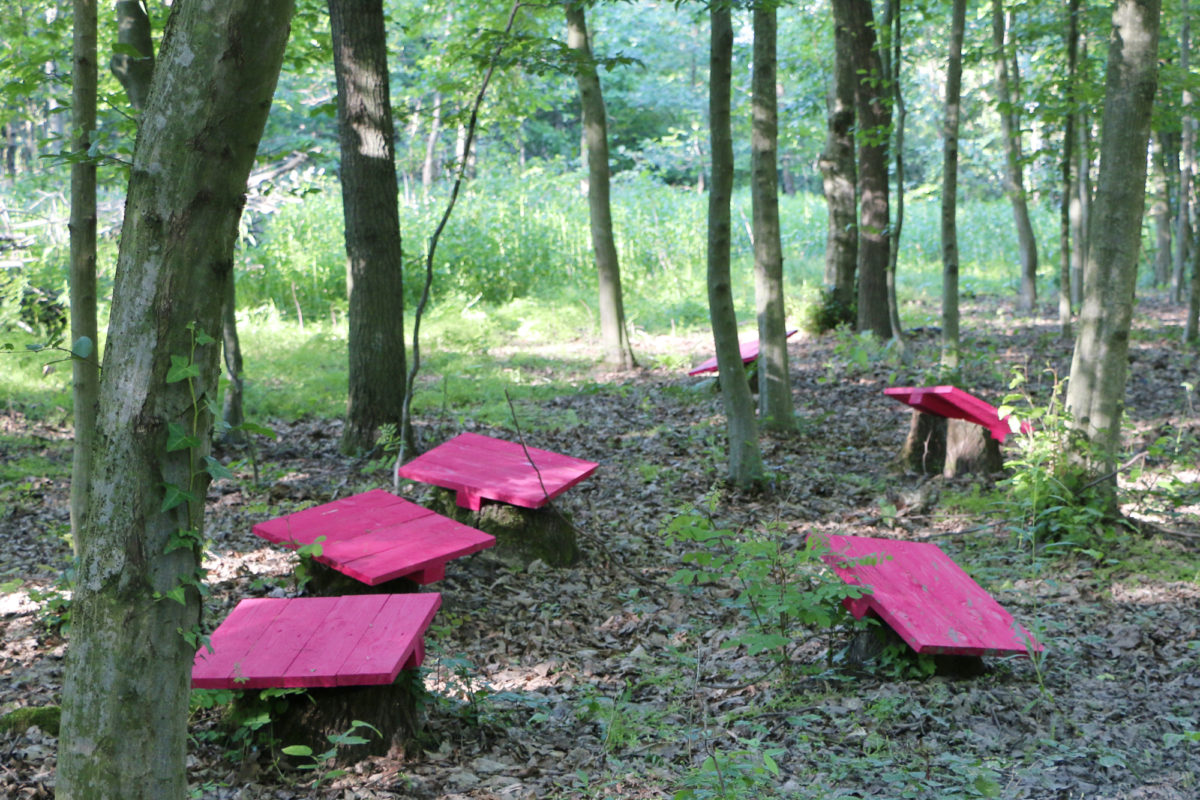 pink elements in the forest inviting to view the scenery and realizing the difference between constructed fields and randomly appearing forest element. 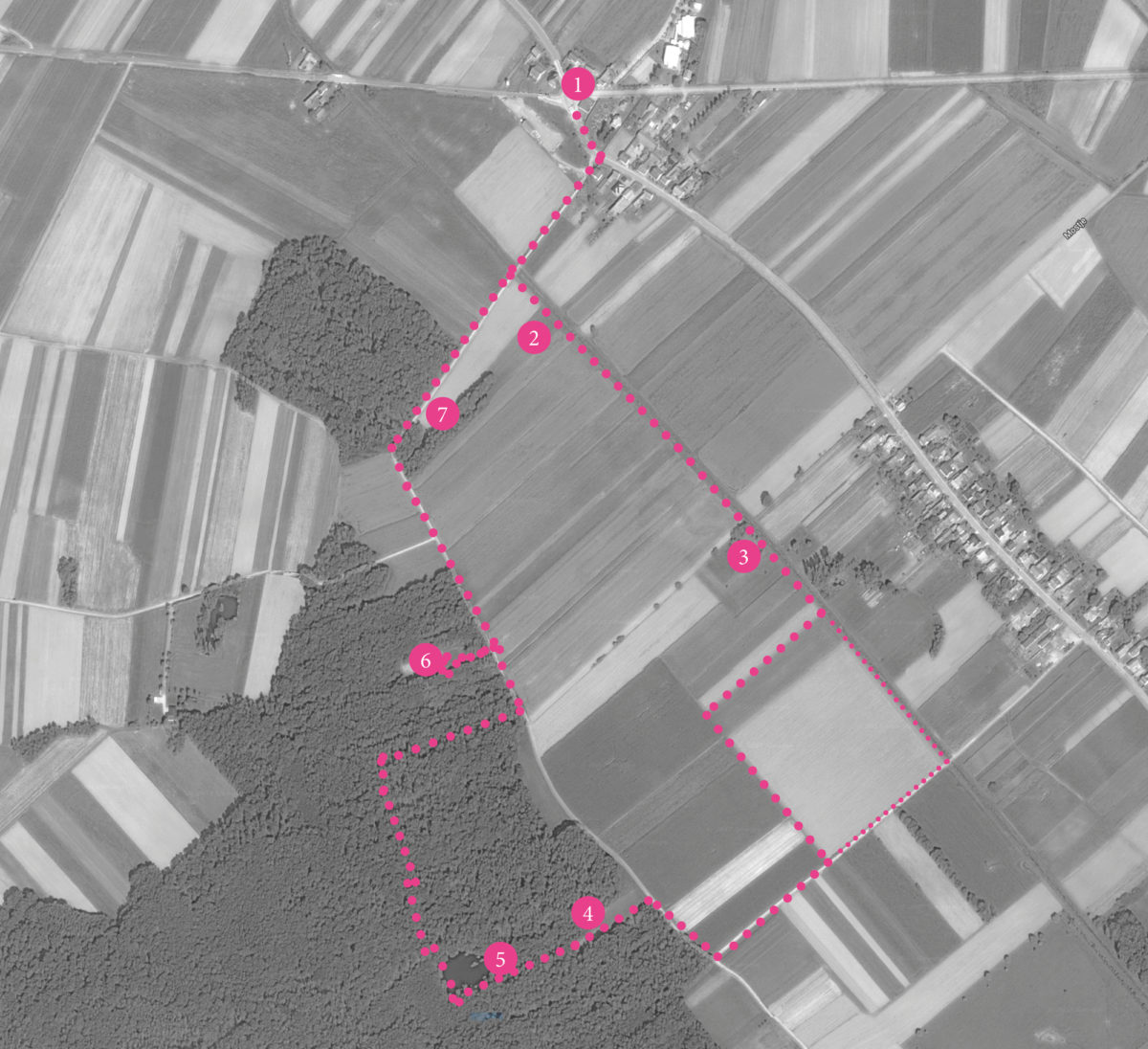 "Beyond nostalgia and romantic longing for lost traditions, the Countryside Reloaded collective project refers to the manifestation of a hyper-reality related to a constructed countryside illuminated by the designer’s interventions." 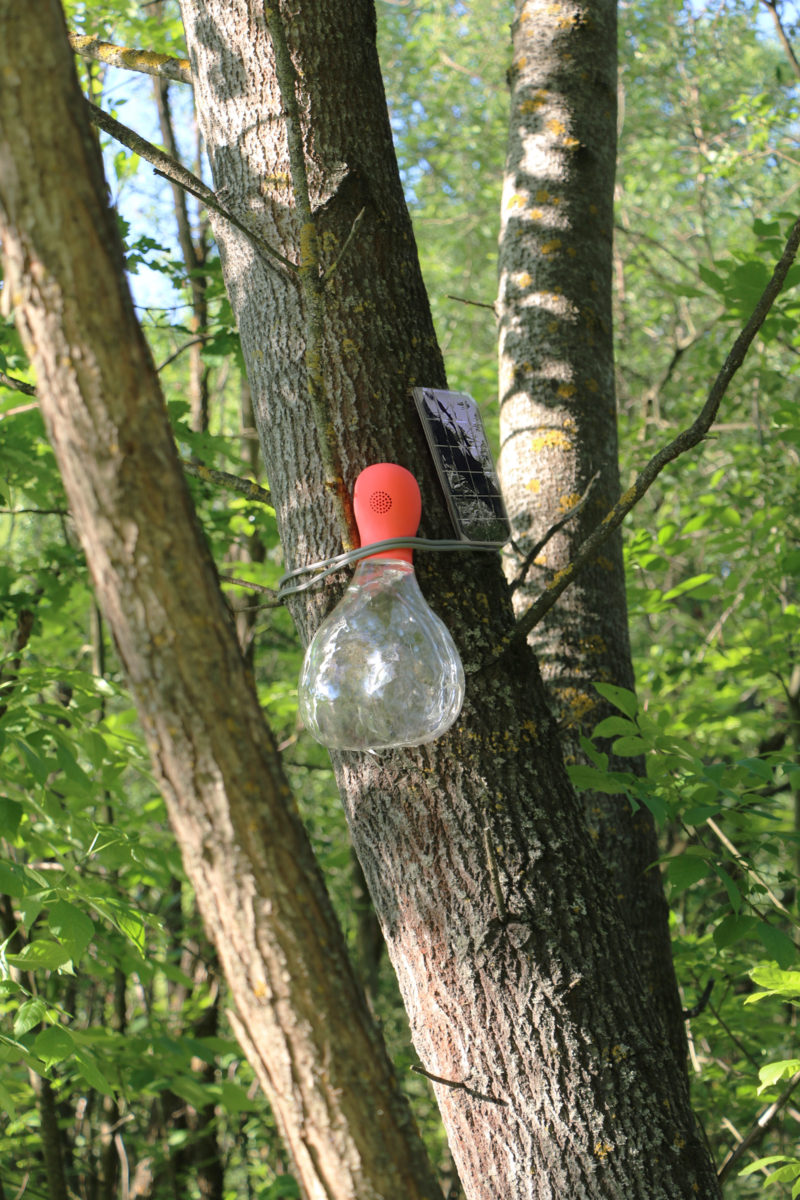 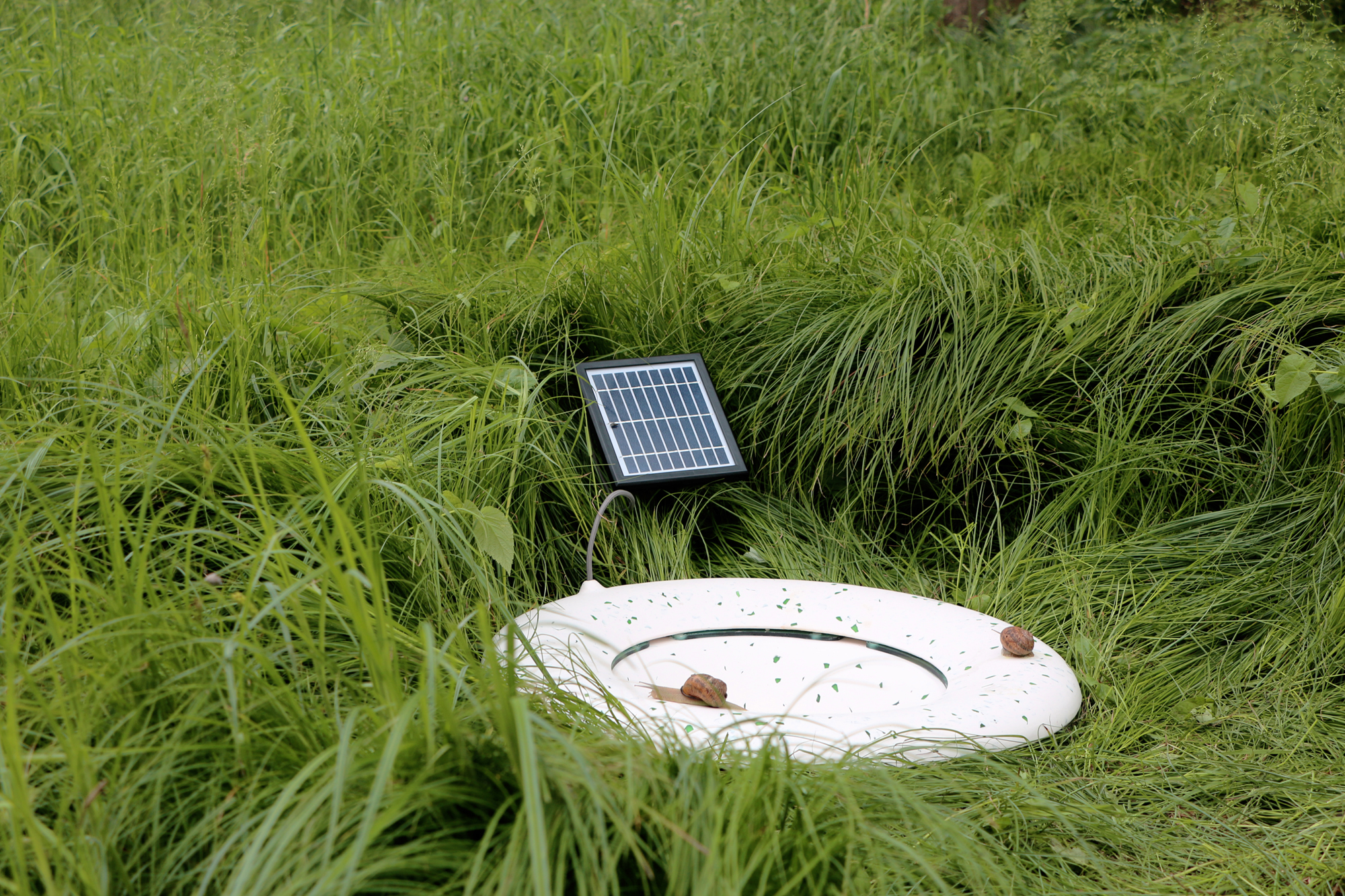 the project autonomous agriculture investigates the ways increased automation could lead to new economic and social systems in the countryside, one dominated by a symbiosis between nature and digital technology. Using two plots of land in Genterovci as a test site, one solar powered robots harvests the healthful, drinkable sap from birch trees, and a group of autonomous roots collects snails in a field to reduce the need for pesticides and to sell them forward as a delicacy. Autonomous Agriculture explores the idea of non-anthropocentric agriculture in which the existing power structure is changed. People also become tools for the machine, rather than the machine serving as a mere tool for people. 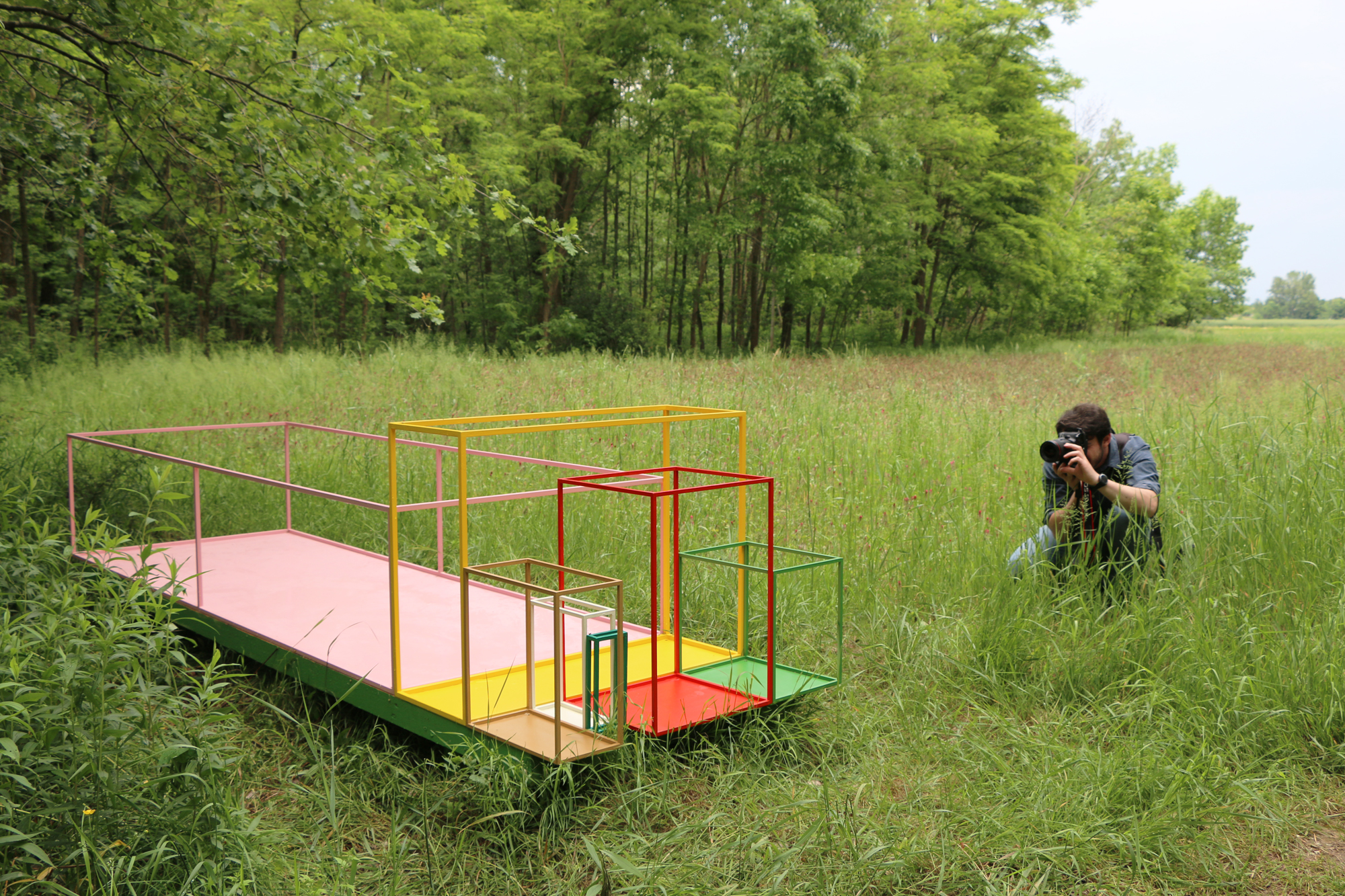 the food fields project transforms data on food production and land use into 3D infographics. Colourful elements show, on a representative scale, how much land is required per person per year to produce enough food; or similarly, show the amount of land used to create specific meals. The biggest field reveals how the energy that is put into the production of wheat is distributed between factors such as fuel, machinery and pesticides, and leaves us with the shocking realisation that just 0,03% of energy can be attributed to human labour whereas 47,2% of the energy used is required for fertilizers. 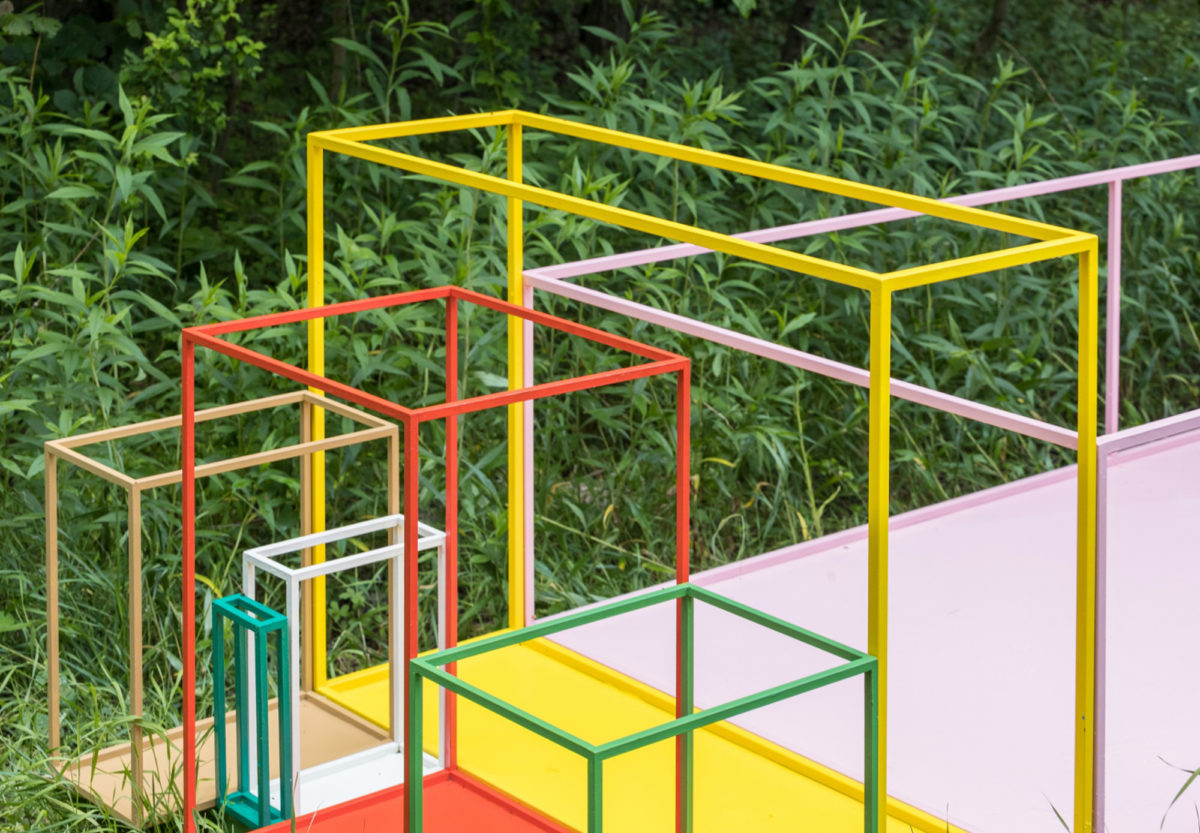 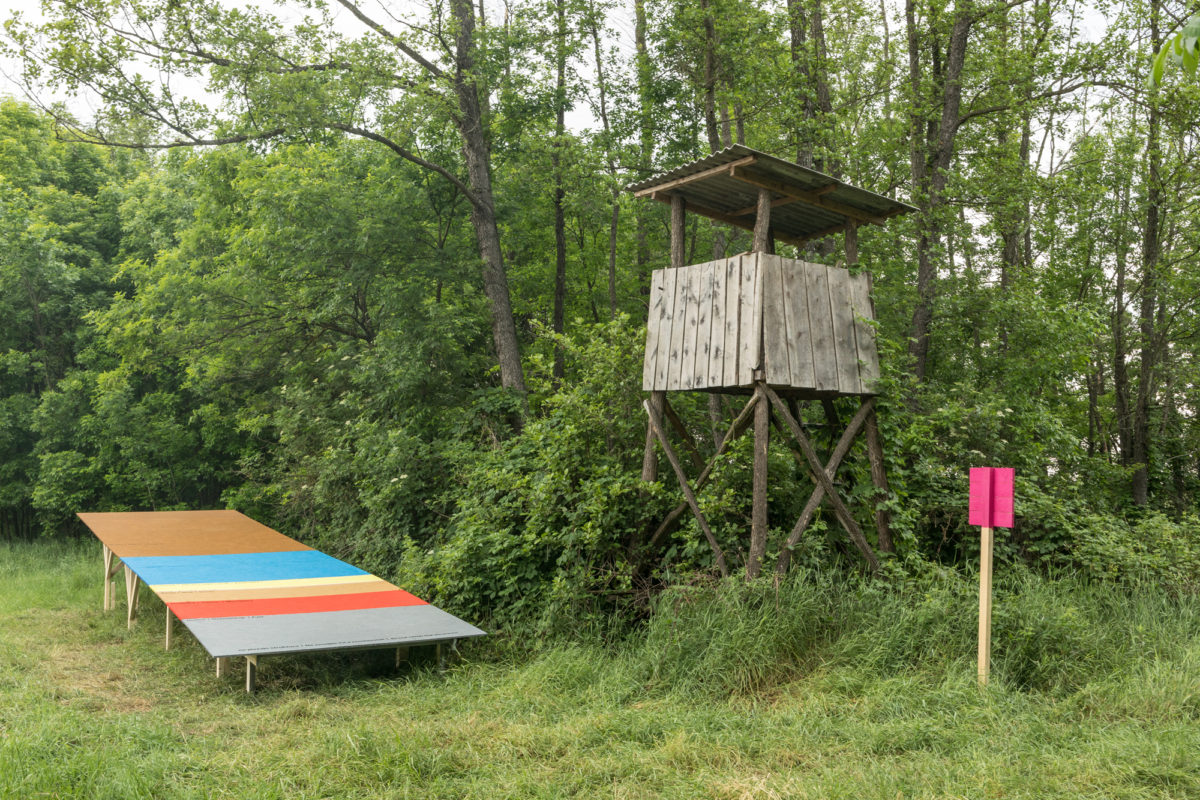 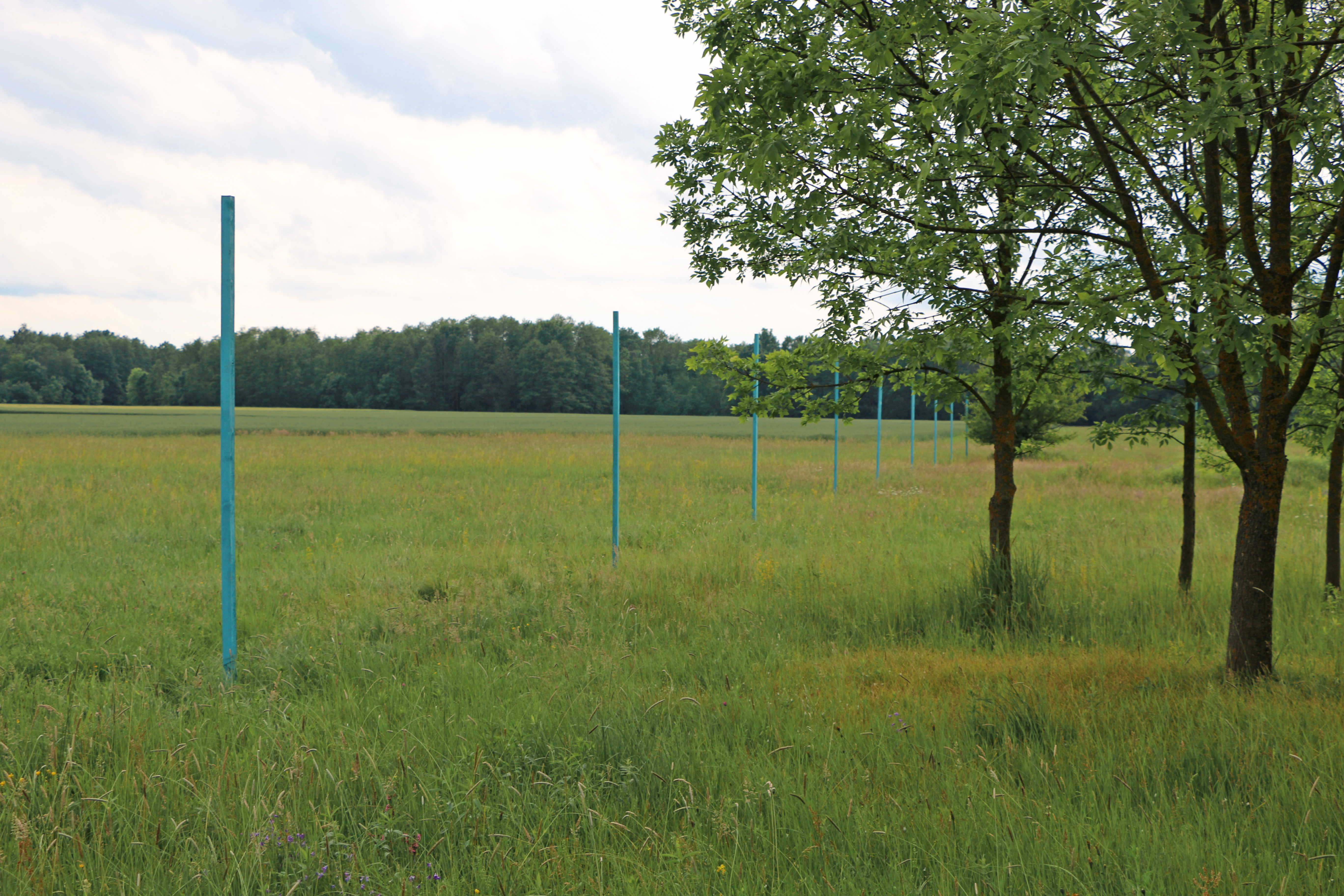 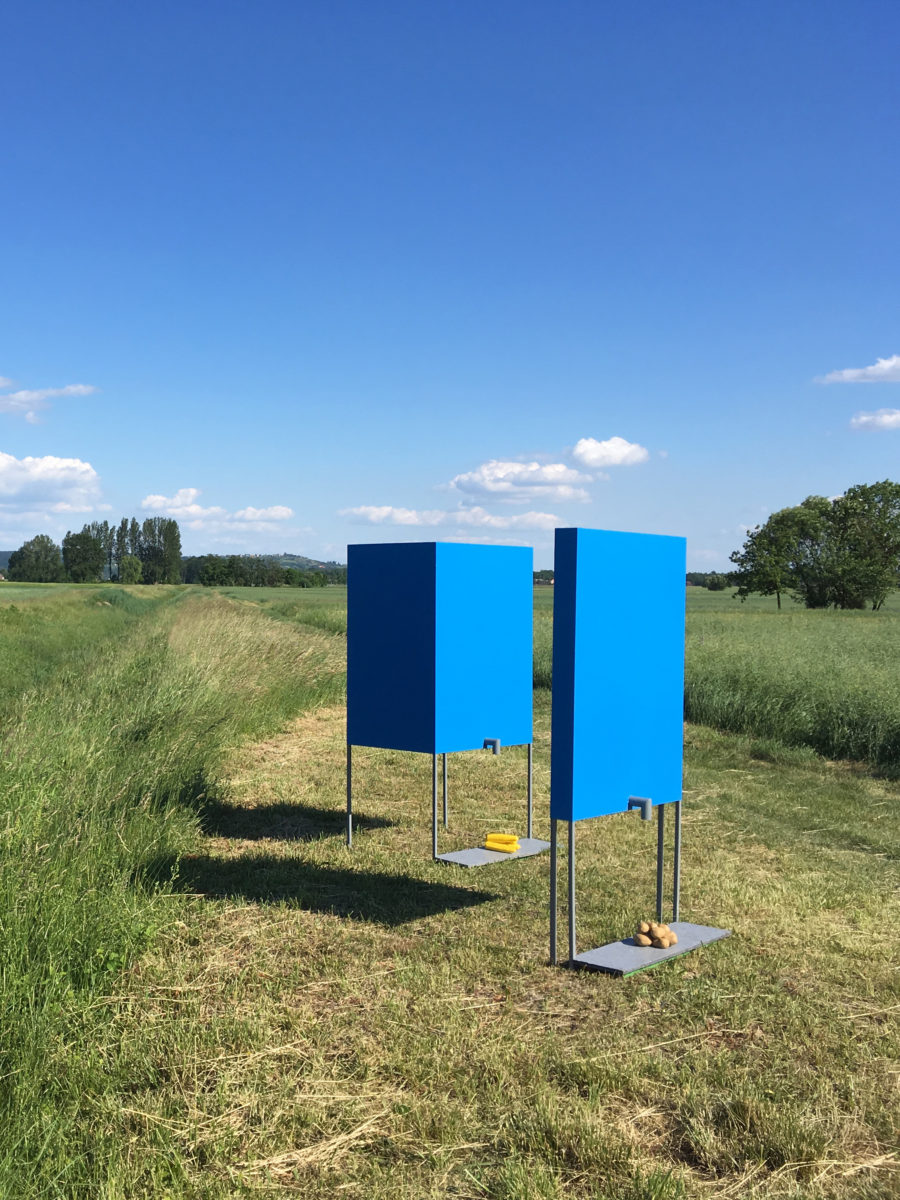 
the thoughts that we tried to bring into the projects 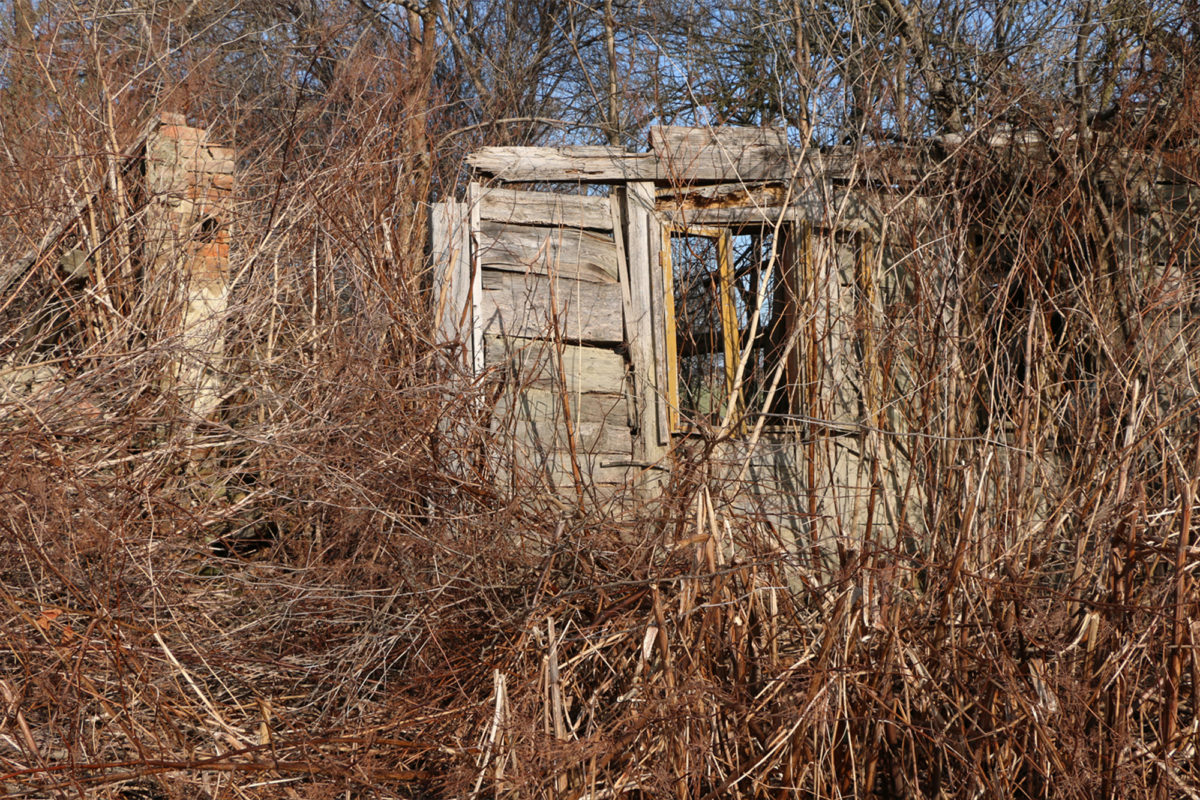 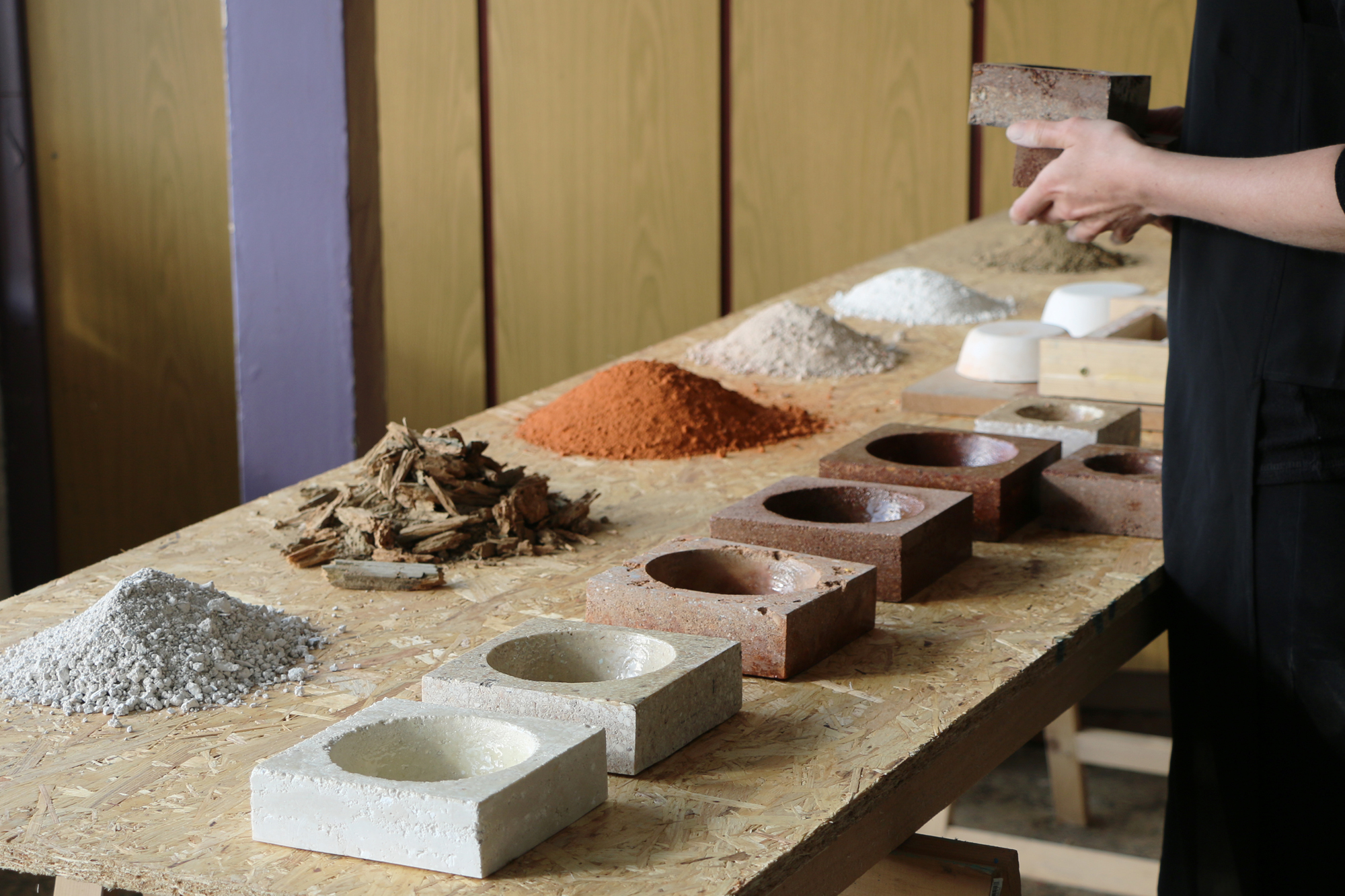 for the empty-house project parts of abandoned houses in the countryside have been collected and transformed into a dust- and gravel-like material used to forge new, synthetic objects containing fragments in miniature of these once lived-in places. In the transformation of these structures the artificial aspect of the countryside is highlighted by this new material in both its hybrid natural and plastic materiality. The shape of the plate, partly brick and partly bowl, reminds the user of the house, the material from which it originated. The plates for the food tours in Genterovci came directly from the ruins of an abandoned house in the nearby fields. 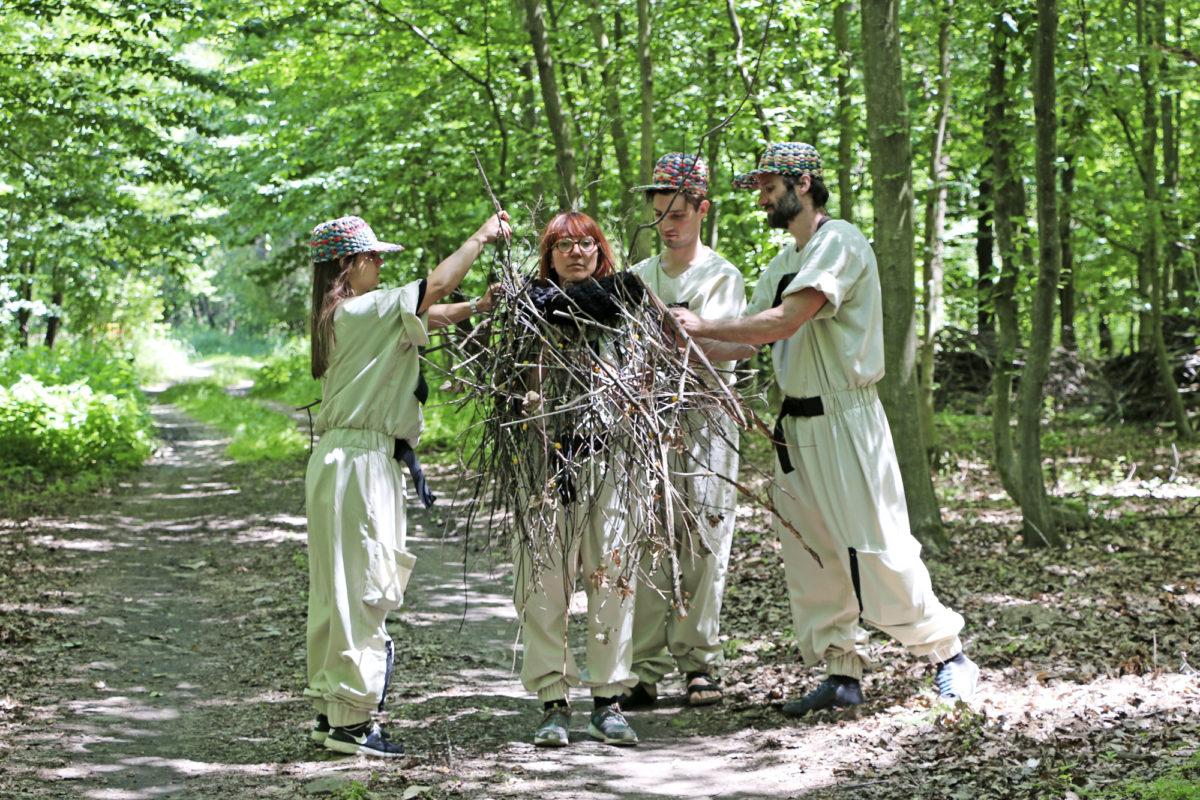 each of the main costumes full-fills another function during the food tours. The stick-man costume 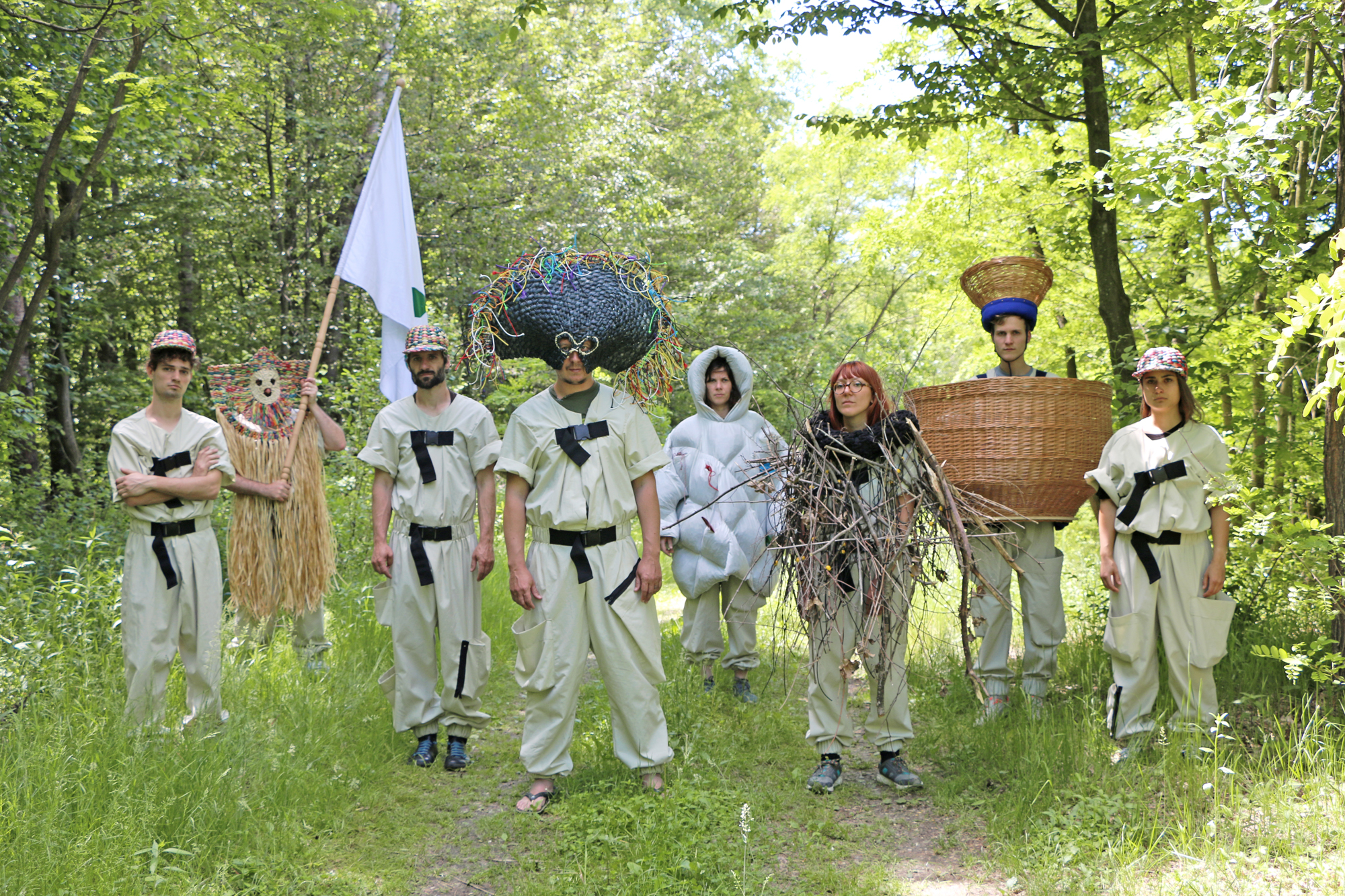 dandelion parade aims to reconnect people with nature and to create community awareness. The participants dress in special costumes equipped with tools with which to forage wild herbs, edible plants and seasonal goods. The collection of costumes triggers memories of rural folklore and, inspired by traditional items, they also serve various other functions: one carries communally collected food, another collects wooden sticks, one serves as a water source along the way, and another is for transporting all the tools needed. The performance requires a collective effort to gather enough food for a communal dinner. 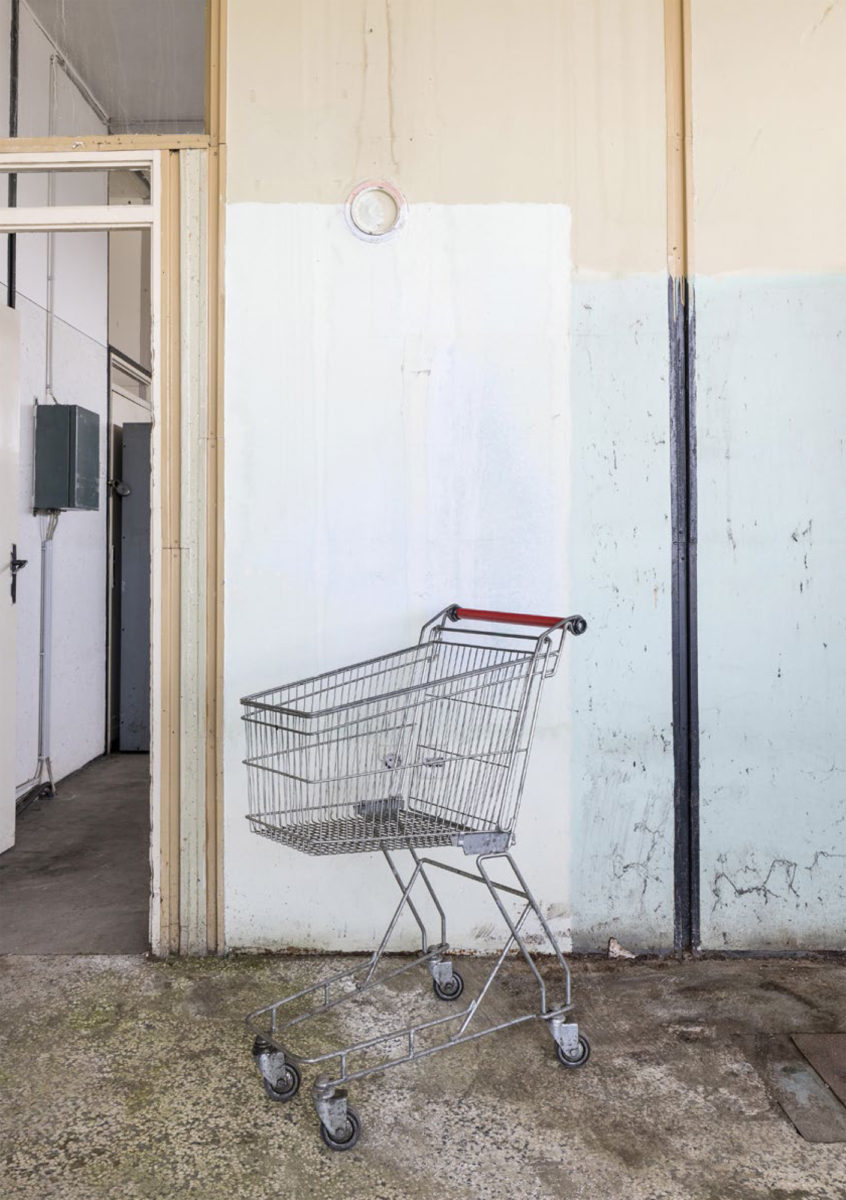 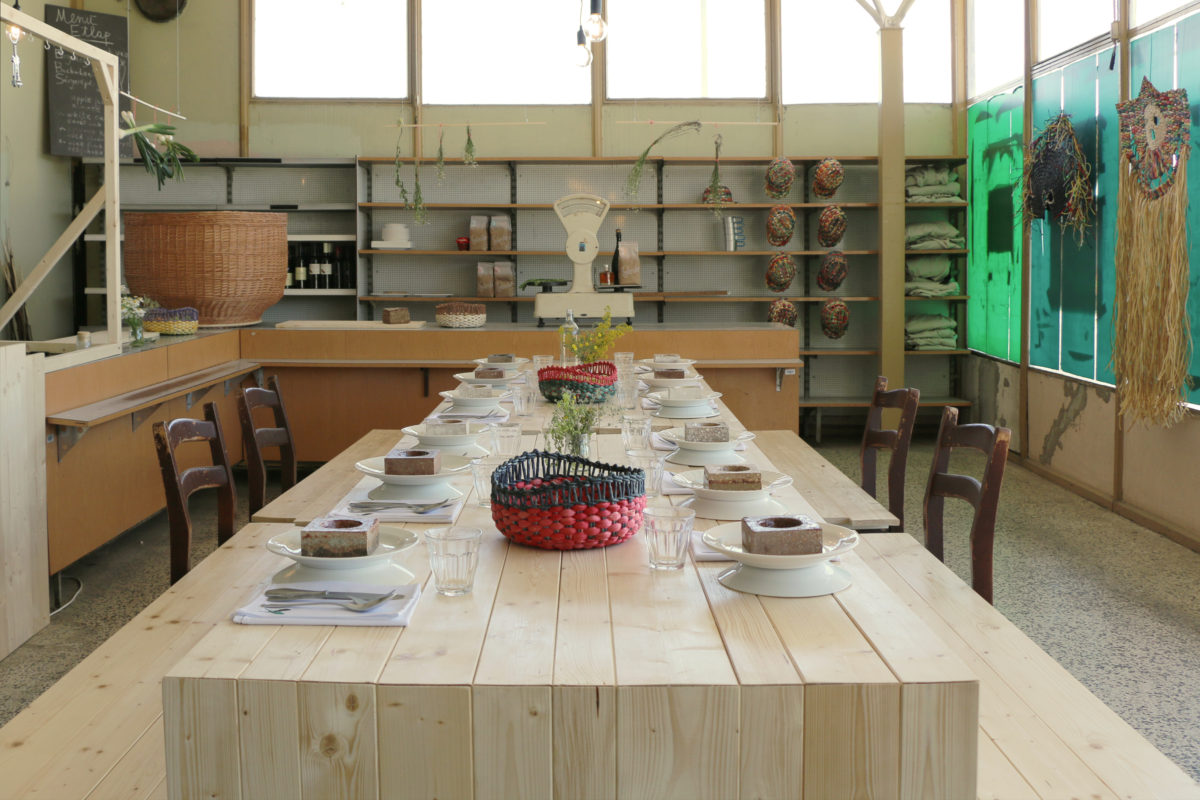 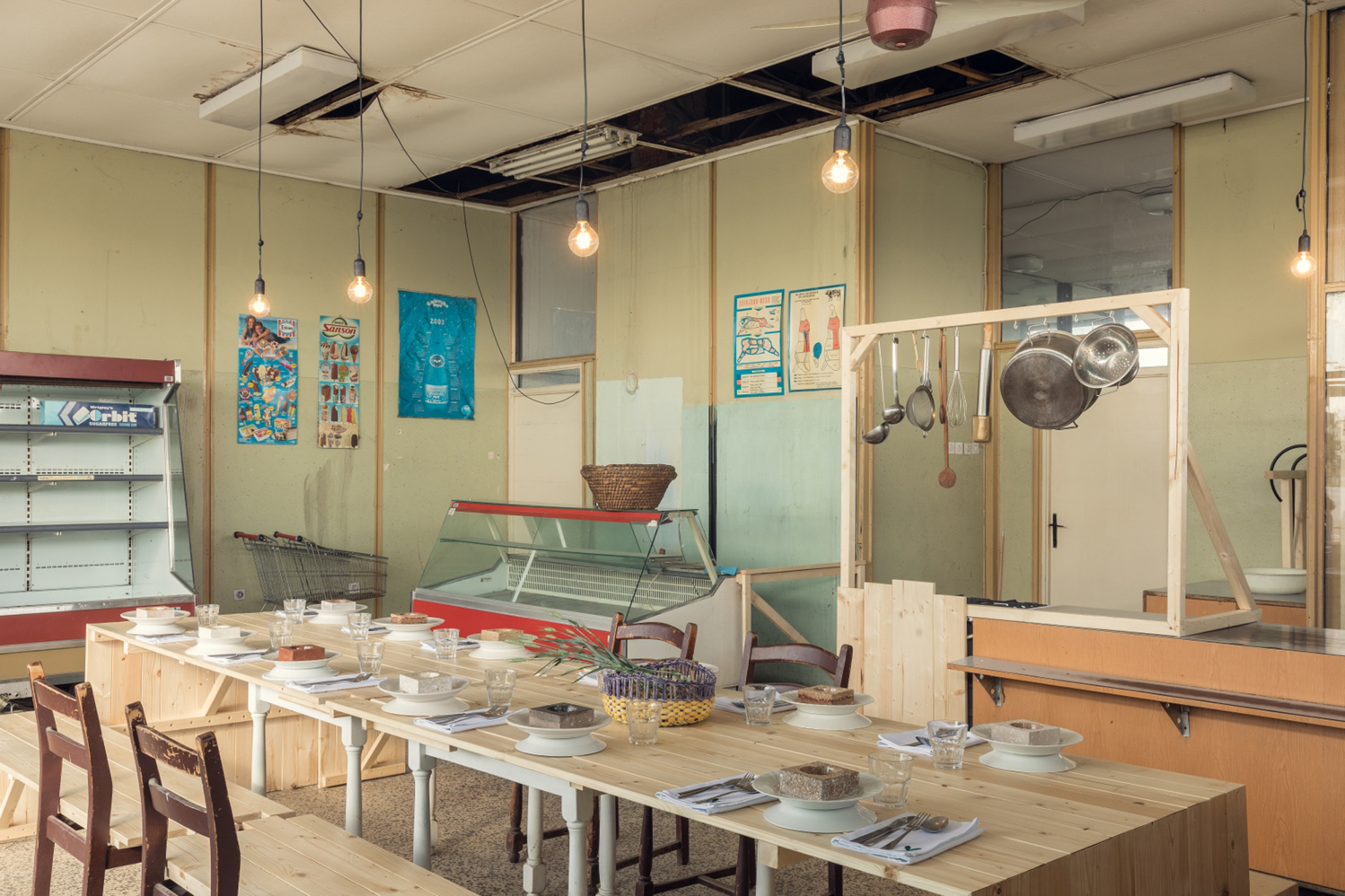 the abandoned supermarket is the starting and end-point of the Dandelion food tour, becoming a place of gathering and a place of and for reconnection. Participating guests fill the space with their presence by temporarily taking the space back and redefining its roles and significance through the experience of food. The designed changes, such as a kitchen, dining tables, and benches act as parasites on the supermarket´s inventory, partly lying on top of it and partly hanging on to it.
image credit: Delfino Sisto Legnani & Marco Cappelletti - MAO 25

building and constructing the projects directly in Genterovci

“Through these varied approaches, each component of the episode, sensitively revisited and staged in the current exhibition, challenges the viewers' perception of the countryside.” 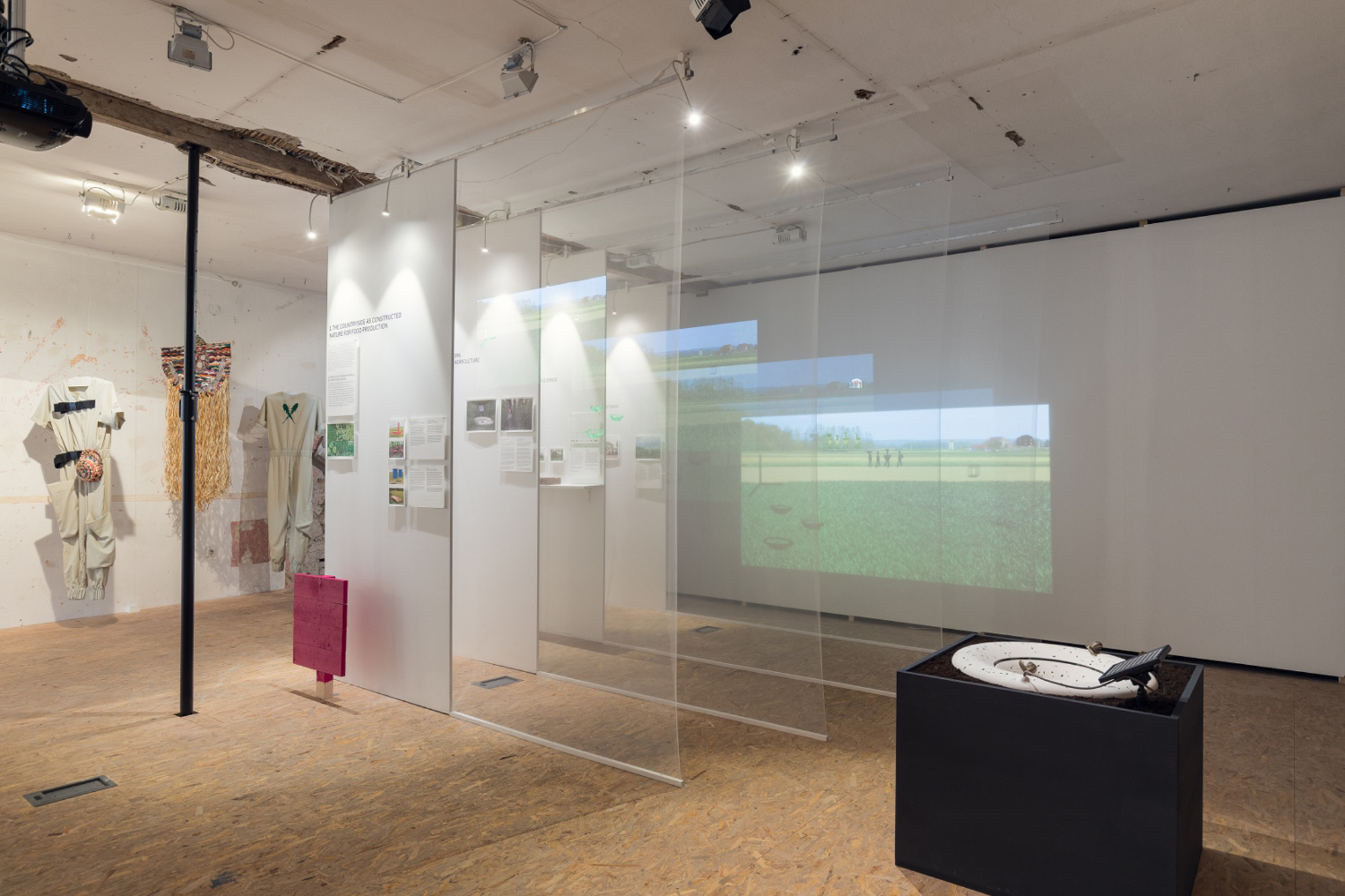